And The Weather Forecast Calls For... 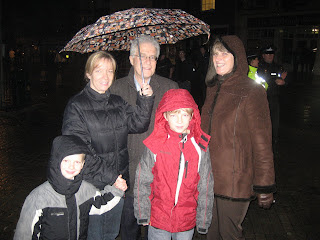 We are back in Norway again, but despite the rain we had a great time with the Wades in Yorkshire. How could we not, as we arrived on Sunday to warm-ish weather - for us anyway - and flowering roses! 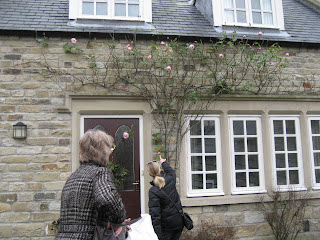 The airline decided to send our luggage to Hamburg, Germany instead of Manchester, England, which did cause a fair amount of irritation on our part. They eventually managed to get the suitcase to Manchester, but the impending New Year holidays and the fact that we were staying in Ripon (a 90 minute+ drive from the airport) finally forced the courier company to admit we probably would not see our suitcase until we were ready to fly home again.

My obvious distress is probably why my hero-of-the-day - aka my father-in-law - spent 7 hours that day driving to-and-from the airport, first to pick us up, then to pick up that pesky suitcase. Gah! Whatever happened to airline service?!?! I could write a long venting post about this, but I will not, as I do not want it to overshadow an otherwise fab visit to England. 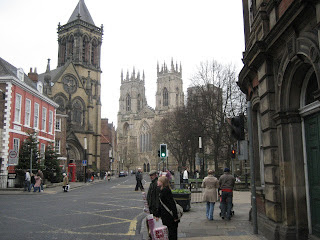 (side shot of the York Minster)

On New Year's Eve we went to a super matinee pantomime in the beautiful city of York. The boys - and we - spent the better part of 4 hours vigorously exercising our stomach muscles laughing (much needed exercise, I might add, following the chocolate overdose during the holidays). If you have never been to a pantomime - well, you've been missing out!

Pantomimes are usually well-known fairy tales with a spin, and the actors often include a principal boy, most often played by a young pretty girl, the heroine, also played by a beautiful young girl (making the inevitable romance a tad unusual), and - most importantly - a dame, acted with much exaggeration and fancy wigs and costumes by a middle-aged man, as a lewd and rude middle-aged woman.

Although the story changes from year to year, there is no plot line to follow, and there's always a few standard scenes: The water and pie scene (in which the main characters get wet and caked), the neon light scene (with all lights turned off), and a pre-recorded video from around the city, most often featuring local politicians, mayors, police, etc. The entire show is peppered with political and pop culture jokes. 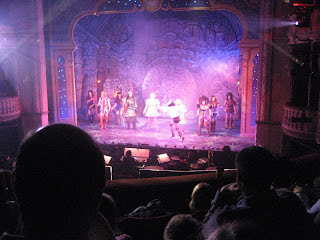 (A scene with "the spice girls")

If this all sounds crazy, it is, but in the UK, this is considered top family entertainment, and though not a native Brit, I've learned to love it, too. It's a great way to spend an afternoon/evening with the entire family.

New Year's Eve was spent in a quiet fashion at home, where we had a highly successful raclette dinner (Christopher has asked me if we can buy a raclette at least 10 times since), played a few games and at midnight went down to the town square to see the fireworks. Despite the rain, the display didn't disappoint, and the boys went to bed with big smiles on their faces.

Unfortunately, the skies really opened up on New Year's Day, when it poured the proverbial cats and dogs. I would have liked to have gone for a walk, but there really wasn't much hope of that. Cue more chocolate and licorice allsorts.

The plane ride home yesterday was uneventful, and we arrived - luggage and all - to a beautifully white snow-covered land, with more snow in the forecast for the next three days. We are going downhill skiing today, and hopefully cross country skiing tomorrow and on the weekend. There may even be time for some skating. Anything but eating chocolate, really!
Posted by Family Adventure at 21:29

Glad you had a lovely visit over here, in spite of the airline's oh-so-typically-lovely (not) customer service attitude.

The snow sounds pretty... they keep promising we'll be getting a bit over here today or tomorrow, but it won't be like you've got. Not even close.

It sounds so lovely (except the luggage debacle, of course)! And raclette is so much fun!! My first experience was in Switzerland 10+ years ago, and although I don't have one myself, my parents bought one so I've enjoyed many more raclette dinners. Yummy!!

Have fun with the skiing. I'm jealous!

That sounds like so much fun...the luggage not so much..but everything else.

I love that shot of the York Minster.

Your holidays always sound like so much fun. Happy New Year to you and your boys!

Happy New Year! I'm glad you all had such a fun trip (minus the luggage...). I would have loved to see blooming roses in winter!

Was that cheese really good? It looks a little iffy in the wiki description!!

Glad you had such a nice time - I don't blame you for loving the roses!!

Welcome home...bummer about the luggage, but alls well that ends...well, you know.

Ah. I miss London. I do wish I could take another long holiday there soon. Sigh.
More skiing! I hope that means more pics too! I love your skiing pics. :)

Sounds like a really great time and I so enjoyed reading this!

I think you guys are awesome, really truly, for doing all this wonderful traveling and having so many amazing experiences.

You either live a charmed life or you tell a helluva story.

Happy New Year to you and yours!

Sounds like you had an awesome trip to the UK. The next time I travel there on business, I am going to a pantomime.

Sounds soooooo wonderful!
..except for the lost luggage.

I'm glad you enjoyed yourselves despite the luggage hassles and the weather!

Licorice allsorts! I needed allsorts for a cake I was decorating last year and found myself SOL. No allsorts in my neck of the woods.

I love the English and their fusty candies.

Sounds like a great trip, overall. (Sorry about the luggage fiasco...)

Typical airline service. glad the rest of the trip was so great though! And bring on the licorice allsorts..one of my alltime faves.
Cross country skiing--I am too jealius.
We FINALLY got a couple inches of snow here in the Carolinas yesterday (my snow dance worked), and we have been having a blast, since of course the entire city of Asheville shut down due to the fact that we rarely see the white stuff. I grew up in the North though, so I am lovin' it!

sounds like a great time - sans the baggage issue...we had a similar problem this Christmas...we flew from Ottawa to BC and on our return flight they lost 3 pieces of our baggage - one being our car seat...now we have to buy a car seat and they are only giving us $100! and the seat they lost is closer to $200!

Sounds like a great trip (minus the luggage woes)! Happy New Year!

This sounds wonderful! I'd love to see a pantomime! After reading this, I don't think you need to fear that your boys are overly dependent on their electronic toys. Sounds to me like they enjoy good old fashioned fun even more!

I love your photos... It's almost as good as being there. Or at least pacifies me until we finally get to travel. Just 14 more years until my youngest is 18. :)

Gorgeous pics! Did I tell you my husband lived in York for a year when he was 14? His dad got a master's at the university there and they dragged seven kids over for a year. LOVED it in the end, but it was quite the trial to get them all there and settled.

Sounds like a lovely adventure, how fun. Too bad about the suitcase though, that could really put a damper on things!
I would love to take my kids to a pantomime, I think they would adore it.
Have fun skiing!

Raclette, yumm. Please invite me if you do it again.

And I do miss the pantomimes. You brought back many memories with this post, glad you had a wonderful New Years, bag crisis notwithstanding...

Siiigghhh.... That sounds SO great - even with the rain and the luggage.... I love reading your posts and living vicariouslly! 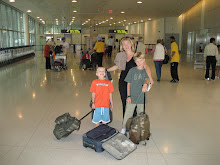